The Big Day Has Come - Departure

The big departure day, Dec. 13th, came up quick, a little too quick.  I was not finished building the shelf/bed frame in the 4runner and still had a load of stuff to get rid of.  Luckily, time is what I have plenty of, so I departed Friday, Dec. 14th instead and successfully made the first trek of my journey - 600 miles north to Portland to visit my bro, Martin. 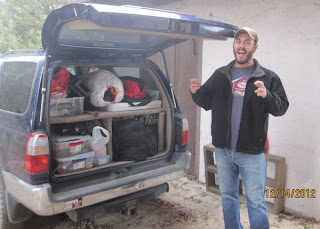 For anyone that has not driven in northern California, it is one of the most beautiful places in the world.  The picture below is the view from my driveway in Napa Valley.  This was how the valley looked the day I was taking off...not so easy to leave this behind. 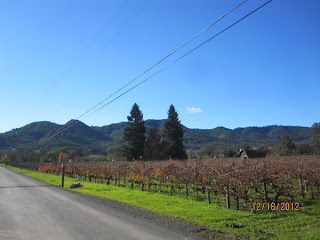 After my final drop of clothes & goods  at the homeless shelter & Goodwill, I drove east out of Napa on Hwy 128, passing along Lake Berryessa and out to Winters, CA (small agricultural town growing nuts & fruit, among other produce).  Along the way, I passed handmade signs of locals selling persimmons, oranges, walnuts & more; packs of sheep grazing; stacks of beehive boxes; and endless rows of barren apple, pear, peach and everything else trees.  How does anybody go hungry in this area??

Once I got on I-5, I passed Lake Shasta, Mount Shasta & Shasta River.  Shasta!! 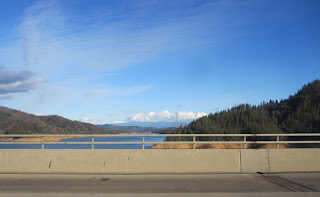 I spotted snow for the first time as I came up on Mt. Shasta and was about 5 miles out from Weed, CA.  Yes, there is a town in California called Weed. I've heard that there used to be a sign at the T-intersection off the exit that had an arrow pointing left saying "Weed" and an arrow pointing right saying "College".  Needless to say, this sign was stolen over & over again.

So....with the darkness coming on once I hit the Oregon border, my scenery was taken away.  I made a stop for gas in the small town of Canyoneville, OR, where the high school gas attendant (in Oregon you can't pump your own gas) had just been given a small flyer talking about the end of the world with a picture of Mayan ruins on the front.  The attendant says to me, "There are some strange people around here.  If the world wanted to end, it would just do it itself".  His unexpected philosophical beliefs threw me for a loop so I just laughed and agreed with him.  I made it to Portland at 10pm, happy to have completed the first day of my trip.

Unfortunate event:  Cruise control stopped working about 1 1/2 hours into the trip.  My quick research tells me it is likely a blown fuse or faulty vaccuum tube...will check tomorrow.

Fortunate event: Gas is the lowest I have seen in years!  I filled up in Canyonville, OR for $3.15/gallon - say what??
Posted by Bliss Wine Tours at 8:45 PM