I figured I have to talk a little about the truck, Barney, that is going to take me 20,000+ miles. After about 2 months of searching on Craigslist I came across this blue/purple (it is technically ultraviolet blue according to Toyota) 1999 4Runner located in Sunnyvale, CA.  Now, in the beginning of the vehicle search I was being more choosy about colors, but after a few weeks I was like, "If it is a solid truck with 5 speed transmission that runs well, it can be doodoo brown for all I care."  I thought my 4runner looked more purple at first so named it Barney, though everyone seems to think it does actually look more blue.  The name is staying until I hear of something better. 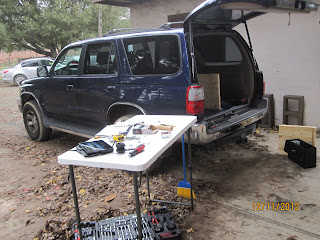 So I bought this beast with 246,000 miles already on it - I mean, what's another 20,000 or so?  It runs great and needed very little work done to it (new battery, small oil leak and that's about it).  I found the moon roof leaked and fixed it with a $8 tube of waterproof sealing caulk.  I also built a 2 piece folding shelf so that all my stuff can be hidden below AND I can sleep on top.  I have never built anything like this, so it was a fun/frustrating learning curve.  Biggest lesson learned - a staple gun to attach the carpet would have saved me hours compared to the 3M spray adhesive which works to some degree, but you have to weigh down each piece and wait for it to dry.  It doesn't like to dry when it's your last night and 40 degrees out.  Since then I hammered in a bunch of tacks so it is good to go.

Thanks to the great people, Jessica, Kobus & Jared, at www.liferemotely.com who supplied pictures and info on the mods they did to their own 4Runner, I was able to get a base plan together.  I started by attaching 17" tall x 1" thick boards to the frame with corner brackets to serve as the base for the back "shelf". 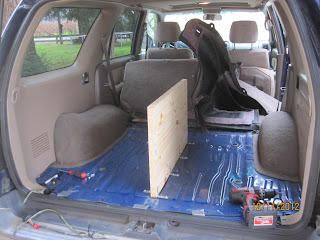 I pulled the carpet and padding up for this, as you can see.  Here is a shot with all 3 boards in place and the carpet laid back in place: 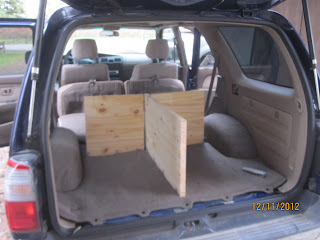 Next came building the back foldable/removable shelf.  It is 3/4" plywood, cut into 4 pieces and attached back together by door hinges. 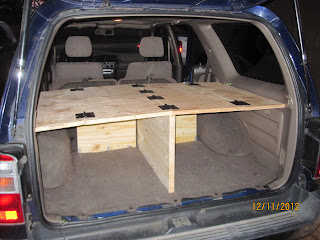 Now for the magic of cheap, low-quality carpet!  I also added and carpeted two thinner supports (one you can see on the left) on the sides. 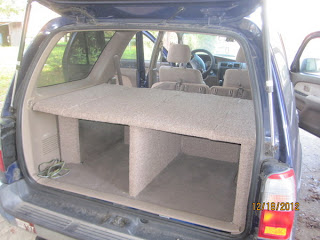 Now watch it fold...it can fold in the middle too so that  I can just fold up just one side.

Now the view from the inside.  This shot shows a carpeted lock box with a carpeted wooden block standing on top, which serves as the support for the front shelf.  The block also hides the already-hard-to-see key hole for the lock box.  To the left of the lock box is one more standing support board which stands just about 3" behind the one supporting the back shelf. 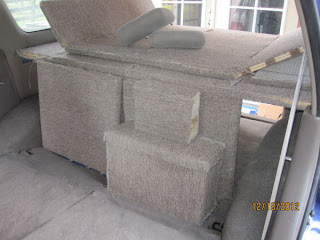 Kuni, let's see what's in the box!  Nothing!  Absolutely nothing!  For anyone that has never seen UHF from the 80's, it's a winner.  In reality, this box with hold my most valuable possessions. 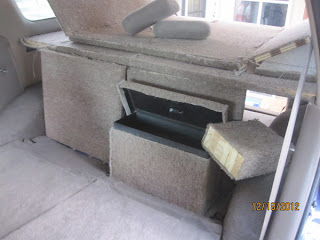 I am going to keep the back seats down as much as I can so that everything will be hidden from view, but I am happy to pick up fellow travelers so the back seats do function as normal still. 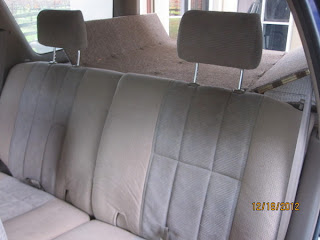