It’s Thursday, August 1st and I am writing this from El Poste Rojo, a tree house hostel  just outside of Granada, Nicaragua. 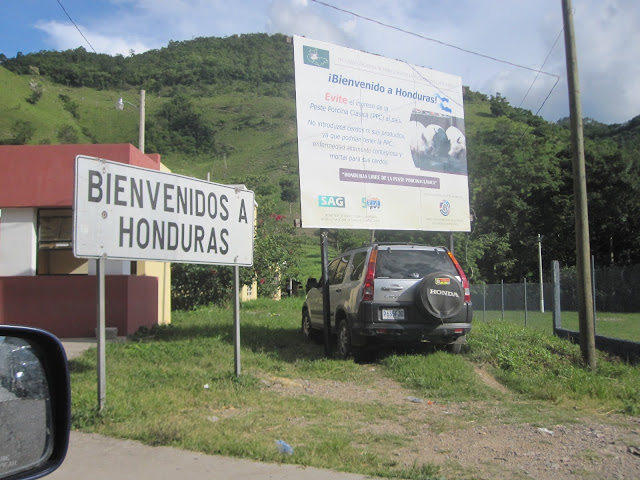 Honduras!!  I’ll be honest, this is the country I felt most nervous coming into due to the danger warnings.  Of course, I needed to see it for myself.  The border crossing was the 2nd easiest yet (after US into Mexico) and I cruised right throughon a lazy, humid Friday afternoon with no lines.  Once cleared, it was only 10km to the beautiful little town of Copan Ruinas, the closest town to the Guatemalan border.  Copan Ruinas is also a municipality, which has only 30,000 people, including the small town of the same name with the ruins.

My car parked across the street from La Iguana Azul, a hostel I stayed in for 2 nights.  Safe parking right in front of the hostel is always a plus: 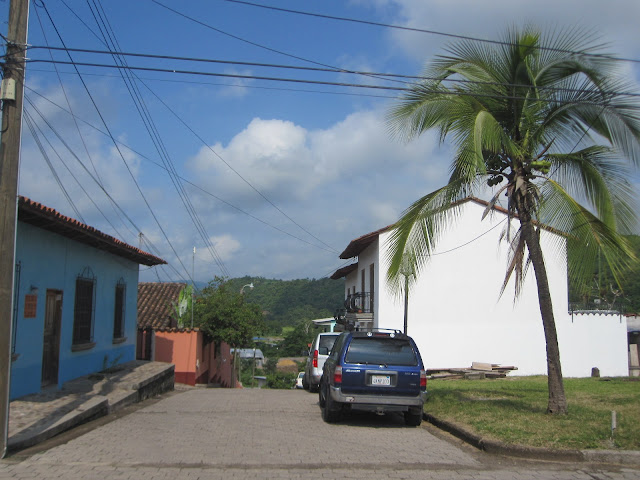 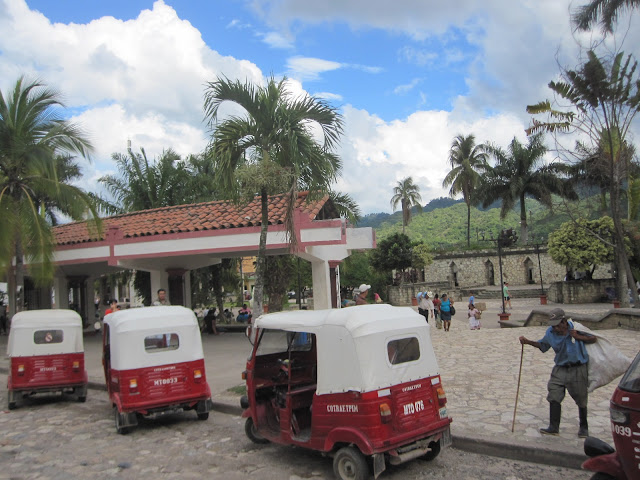 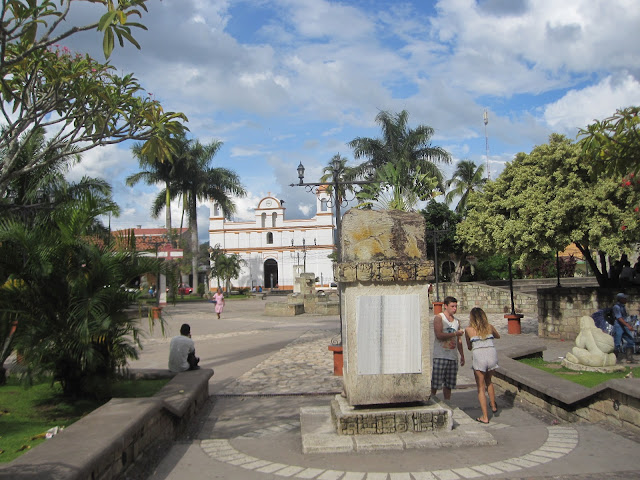 From El Iguana Azul I walked the few blocks into town to the Via Via Café to grab some dinner. That night I got one of the best night’s sleep I have had in a while – no random dogs barking, no construction going on, no loud roommates….peace & quiet.  It was a perfect way to wake up on my 33rd birthday.  I made my way back to the Via Via Café the next morning to start my birthday with a relaxing morning yoga class.  Namaste.

After yoga and back at the hostel, I met a group of French Canadian girls who were also heading to the ruins and invited me to tag along.  It’s always nice to have new friends to spend the day with.  It was only a 20 minute walk out of town to the ancient Maya ruins, but an extremely humid day, so covered in a layer of sweat at all times.  I was curious to see these ruins after having been in Tikal, Guatemala last year, which has the mother load. 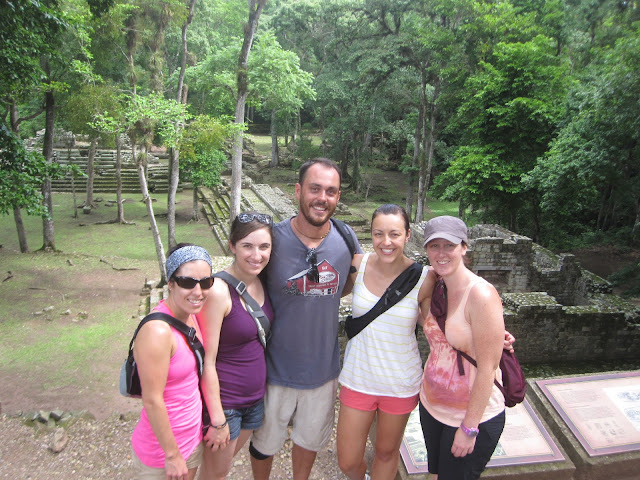 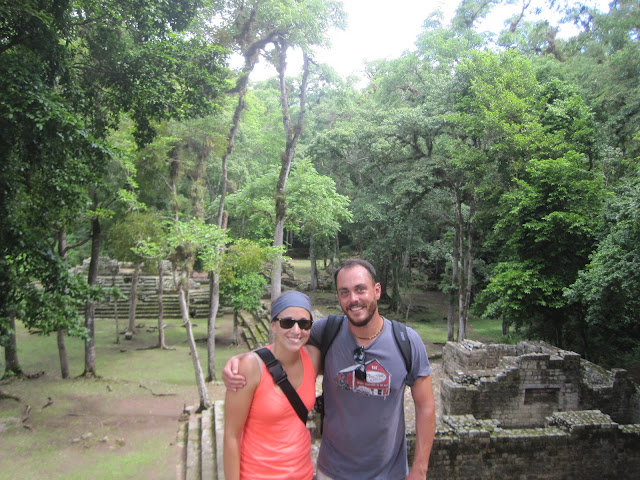 I enjoyed the whole experience but the best part for me was the detailed faces and carvings, which I did not see in Tikal.  If I had to choose, I would still give my vote to Tikal, due to the sheer magnitude and number of structures. 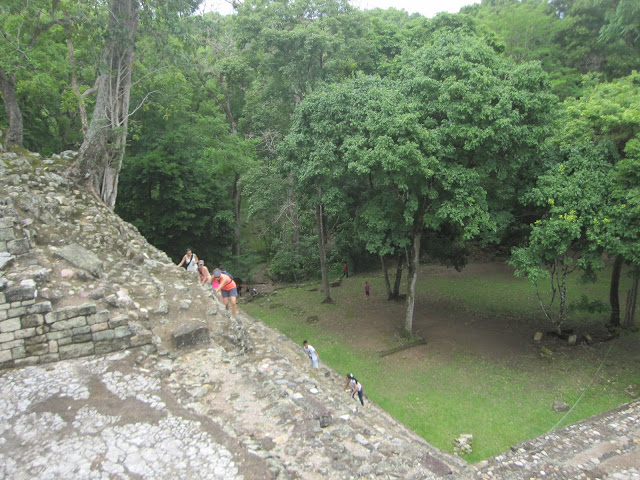 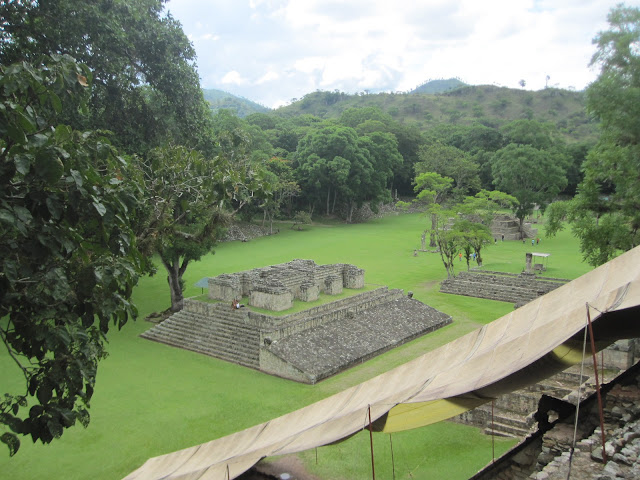 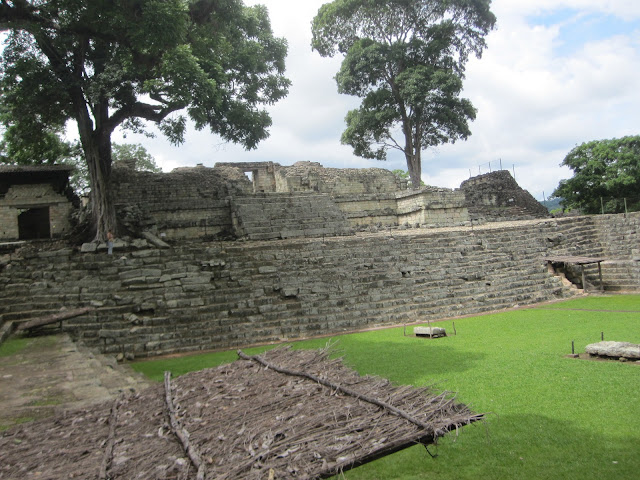 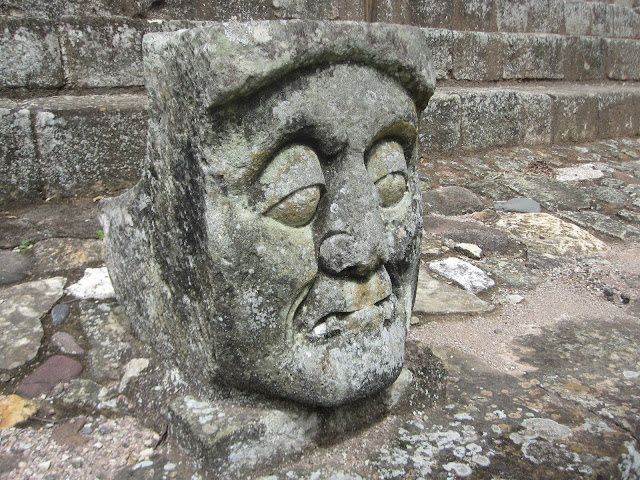 I concluded my birthday with a chicken dinner, which ended with a surprise brownie & ice cream dessert and my Canadian friends singing me “Happy Birthday” in French.

From a recommendation by the owner of Iguana Azul in Copan, I drove east the next morning to Omega Jungle in Pico Bonito national park to experience my first white water rafting.  I stayed at Omega Jungle that night and joined a group of about 12 to raft down the Cangrejal River. The river was low that day because it had not rained for a few days.  All in all, it was a good time but I had hoped for longer, stronger rapids and not stopping so often.  The guides also took pictures throughout the trip, then told us nothing about accessing them and the company hasn't responded to my request for them.  Bummer.  I did take on pic when driving to Omega: 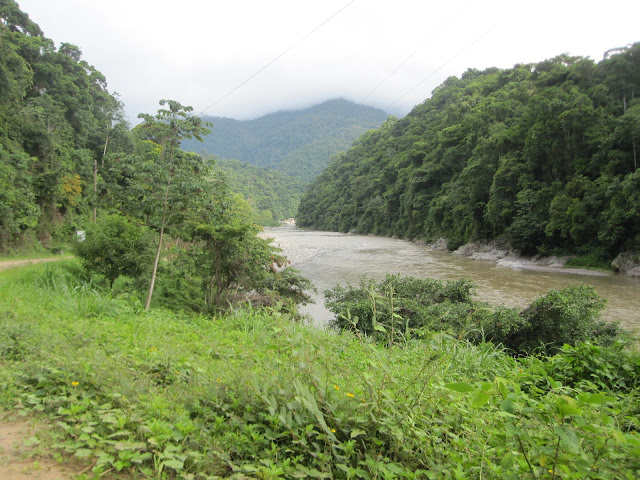 My original plan was to head to Utila, one of the Bay Islands off the Caribbean coast.  While staying at Omega the last night, I talked with others about the other 2 Bay Islands, Roatan & Guanaja, which were supposed to be a better experience.  Utila is a very popular backpacker island with the cheapest accomodations and scuba/snorkeling in the reef.  I decided on Roatan because the diving was supposed to be better...and I was there to try scuba diving for the first time.  I parked my car in the city of La Ceiba in an overnight gravel lot with a 24 hour guard.  Random fact, the city is named after the tree "la ceiba", also the national tree of Guatemala.

From La Ceiba, I hopped on the 1 1/2 hour ferry to Roatan.  Shots from the ferry in La Ceiba: 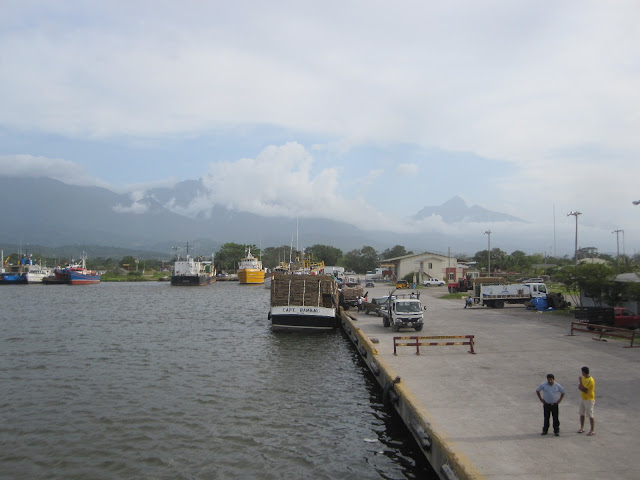 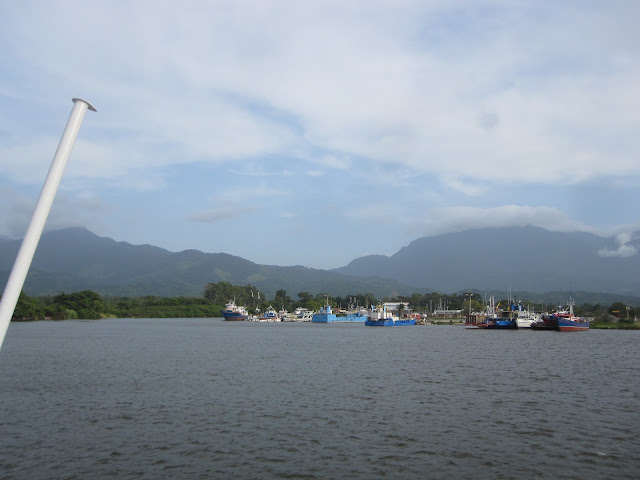 So this large ferry (probably had 200 seats) looked like one of the slow touristy ones where you just relax and take in the view. 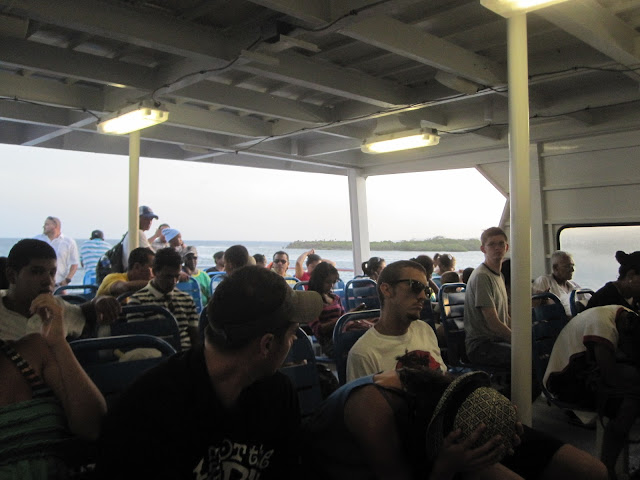 After about 15 minutes, it started rocking and rolling and was jumping waves like a speed boat.  The guys working the boat were handing out plastic vomit bags for anyone feeling queasy, which were quite a few.  I surprisingly saw only 3 people lose it during the trip.  I sat with a group of 7 mid-20s Louisianans who had done the rafting that day and found out one of the guy's parents live on the private, eastern side of the island. I was heading to the more touristy western side of the island to locate La Buena hostel in the small town of West Bay.

I planned on staying for only 3-4 days but ended up staying for 8.  La Buena Onda hostel was a cool little place run by a Spanish woman named Sofi, pictured below: 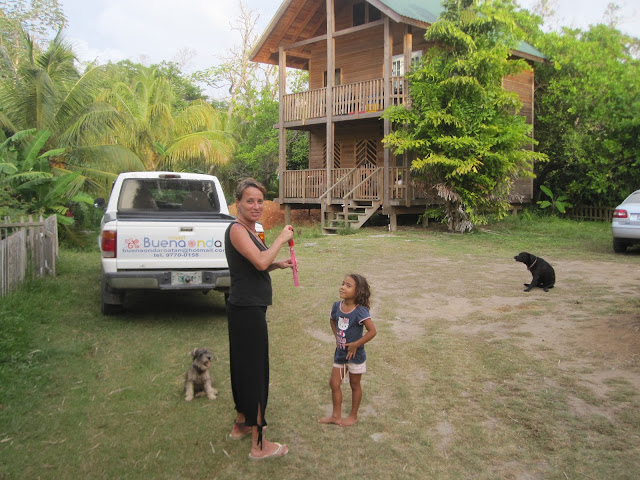 Any hostel with available hammocks is a step up in my book.  The first day I took a boat taxi to the more popular beach in West End, which is becoming a haven for resorts.  I have never seen a beach with schools of fish and an amazing reef so close.  I was up to my waste in the water and had a school of big fish cruising right by.  The snorkeling there was incredible and I wish I had an underwater book or even a Google underwater app that would tell me about all the fish I saw.

The beach in West End.  You can see why I love the Carribean islands so much. 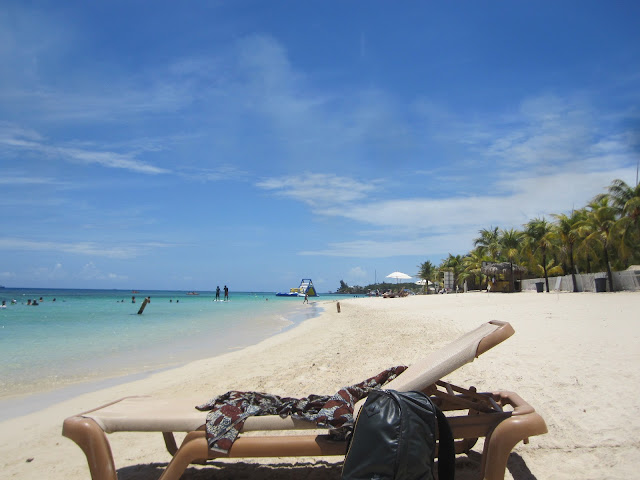 The next day I recovered from the long day in the sun and started asking about scuba diving.  I went to 5 dive shops to check prices and found everyone offered certification too, so settled on the Open Water Certification.  This certification entailed 4 days of confined & open water dives, plus textbook reading & a final exam.  My final pick was Tyll’s dive shop where I met Dorte (from Denmark) who was feeding a baby pigeon at the time. 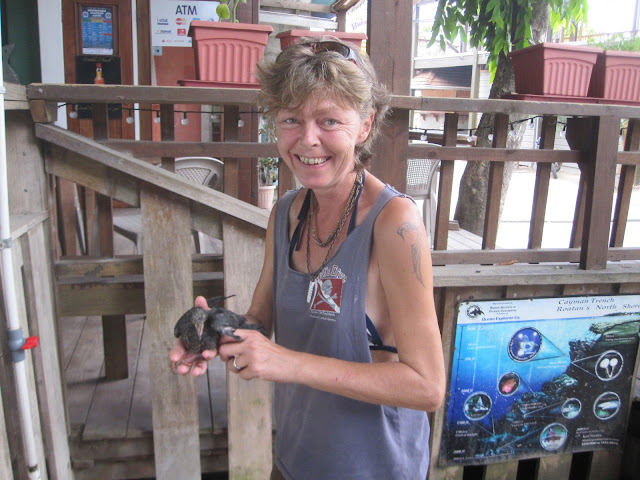 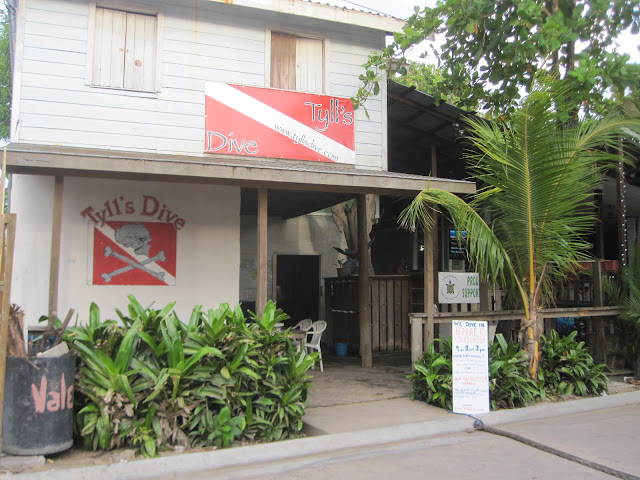 I told myself, they have to be good people if she is nursing a pigeon back to health.  The next morning I started my class with Mel (from England) as my instructor.  I have snorkeled only twice so am new to being underwater with a tank of air on my back.  After my first dive, I was sold – one of the coolest things I have ever done in my life.  There’s this massive underwater world which I completely forget about.  Over the 4 days, I dove as deep as 60 ft. and saw parrot fish, schoolmaster, moray eel, lobster, shrimp & many, many more that I can’t even name. 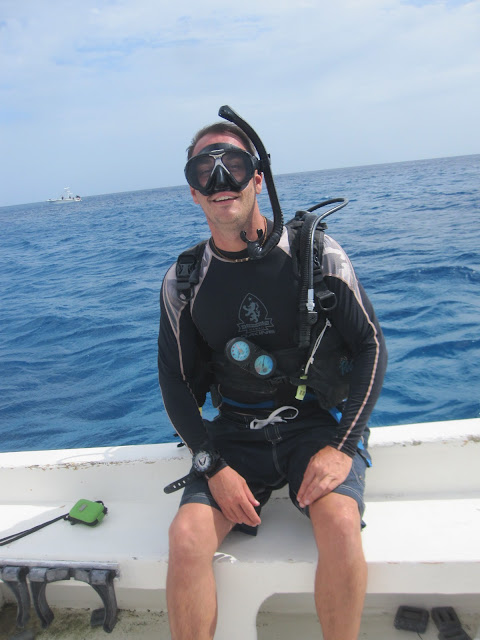 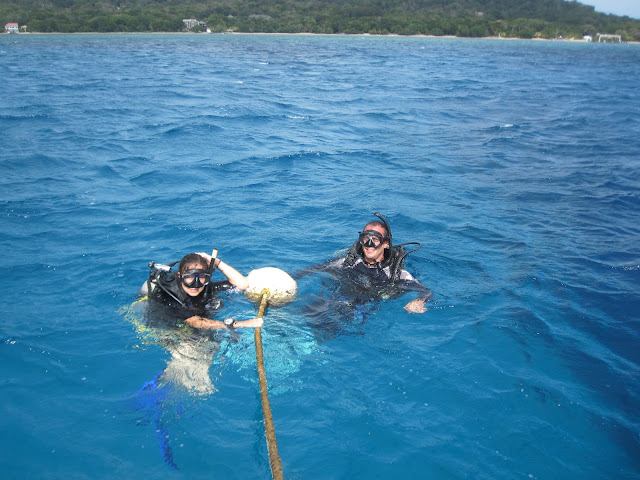 Thank you Dorte, Uve, Mel & Sam at Tyll’s dive shop for a great time! From left to right, Mel (my instructor), Dorte & Uve (dive shop owners) & Laurel (other student diving with me) 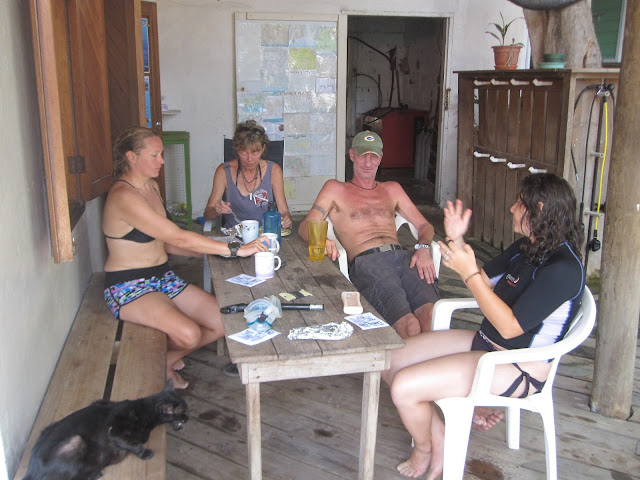 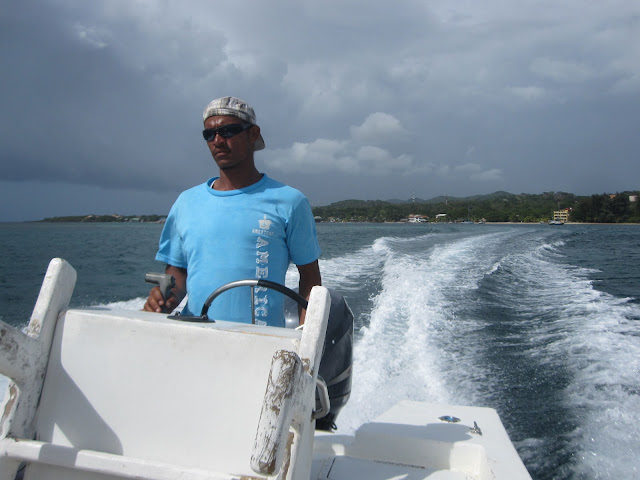 One of several cats that hung out at the dive shop: 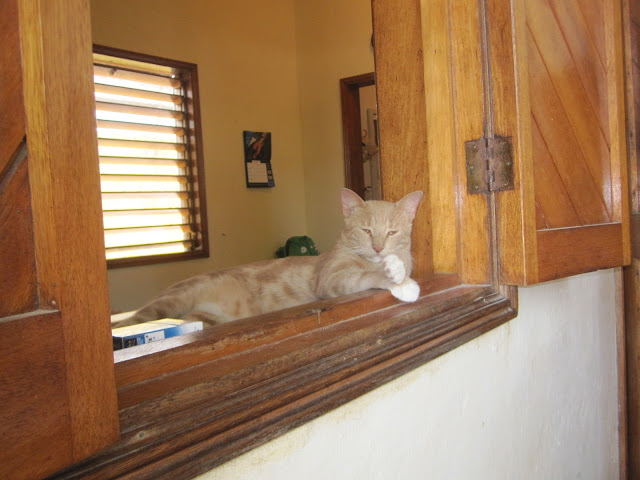 The other thing I would like to share is the things I learned from the locals on the island.  They straight up told me, yes, this is a dangerous place and compared it to the wild wild west.  If you upset the wrong person, they might actually kill you and get minimal to no punishment.  As I was talking to the people at Tyll’s, a local walked by and they told me, “that guy stabbed a guy in the heart (killing him) in a bar fight…and got 6 years in prison for it.”  They said there are others walking the street who have never got punished for murder.  If there are no witnesses, you can’t be found guilty…or if someone is over 60 yrs old or pregnant, they also will never get put in prison.  Talk about an eye opener – I have never heard this from locals anywhere I have been.  Some nice pics of Roatan to offset the murder talk: 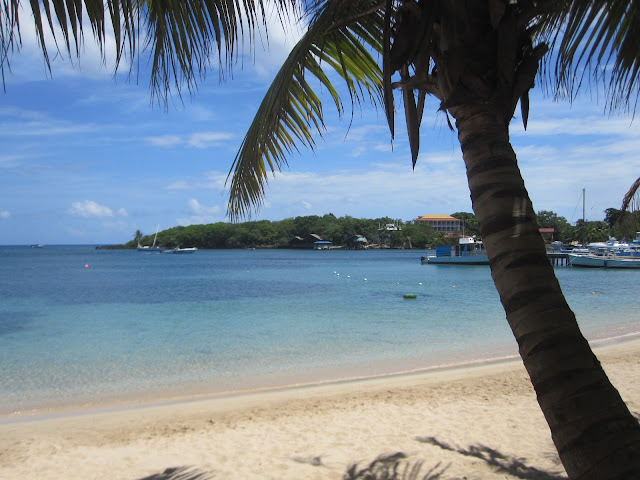 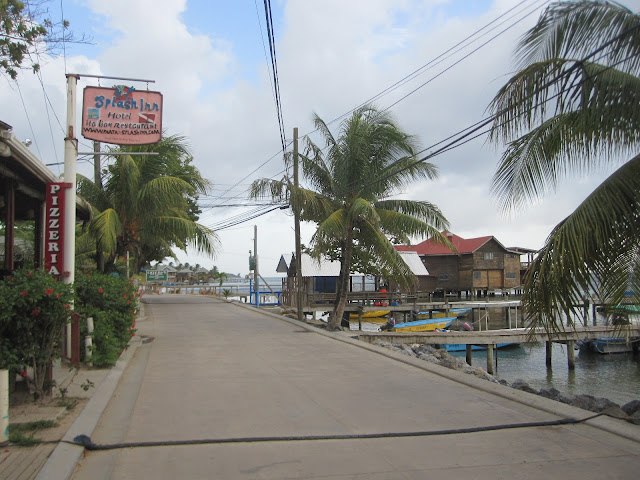 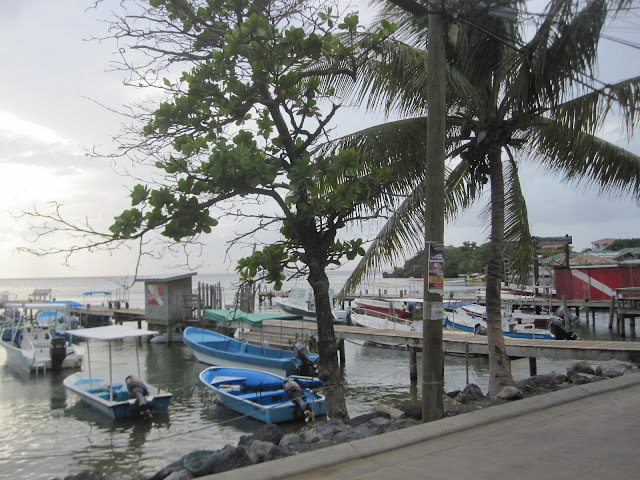 The next morning, Tuesday, after I finished my diving, I hopped the ferry back to La Ceiba (which was much more calm this time around) and happily found my car safe & sound in the lot.  I was headed back west to find the D&D brewery near Lake Yojoa.  The downside to no internet on the road is not being able to find places when locals have no idea where they are.  After a failed attempt at finding the brewery, I turned south to drive towards the Nicraguan border.  I made it to a town about 30 minutes from the border and had my final night in Honduras.  Stay tuned for my time in Nicaragua....