A few fun facts about El Salvador from http://en.wikipedia.org/wiki/El_salvador:

• As of 2009, El Salvador had a population of approximately 5,744,113 people, composed predominantly of Mestizos

• It is in the top 3 in Central America (behind Costa Rica and Panama), due in part to ongoing rapid industrialization. In addition, tropical forests and overall forest cover has expanded by nearly 20% from the year 1992 to 2010, making it one of the few countries experiencing reforestation

• It has a long history of destructive earthquakes and volcanic eruptions, with over twenty volcanoes.

• Today El Salvador experiences some of the highest murder rates in the world; it is also considered an epicenter of the gang crisis, along with Guatemala and Honduras.  A lot of the gang members were El Salvadorans that made their way up to L.A., joined gangs, then were deported back down to El Salvador, where they kept their alliances and continued fighting.  In 2004, the rate of intentional homicides per 100,000 citizens was 41, with 60% of the homicides committed being gang-related.  Based on Wikipedia's murder rates (# of murders/population) by country, El Salvador is the 2nd deadliest country in the world...right behind Honduras, where I will be going next (come on kids!).


The nearest El Salvadoran border to me is La Hachadura, which is just 167 miles (259km) south. So I was off to explore this wild country.  To ease the reader's mood from all this murder talk, I will now show this picture of a triple grown-together banana I purchased from the market.  In Guatemala, triple bananas are a sign of great fortune.  Actually, I just made that up - but what are the odds? 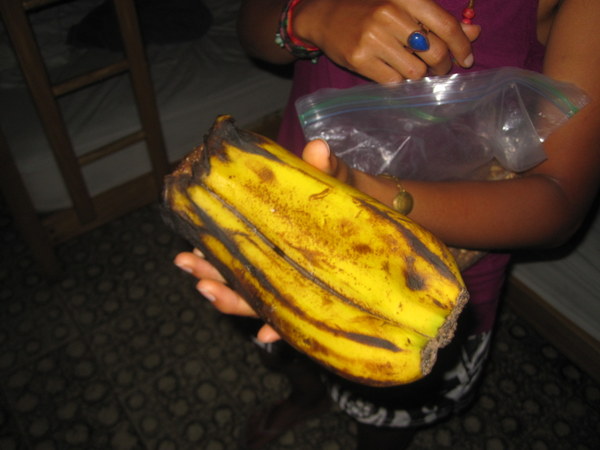 Back to the trip, our first stop was Juayua a quaint little town of just under 10,000 people in the state of Sonsonate.  It sits up in the mountains and the surrounding area is full of coffee farms.

Juayua is also home of the feria gastronimica (food festival open Sat & Sun 9am-5pm).  Every weekend, people come to feast on plates of meat - chorizo, beef, chicken, rabbit, armadillo and more.  I should enter a side note here that I made this trip with a carload of 5 girls.  Here's the group! (from left to right with country) Najam (Sweden), Erika (Sweden), Olivia (Sweden), Gitt (USA) and Hannah (USA): 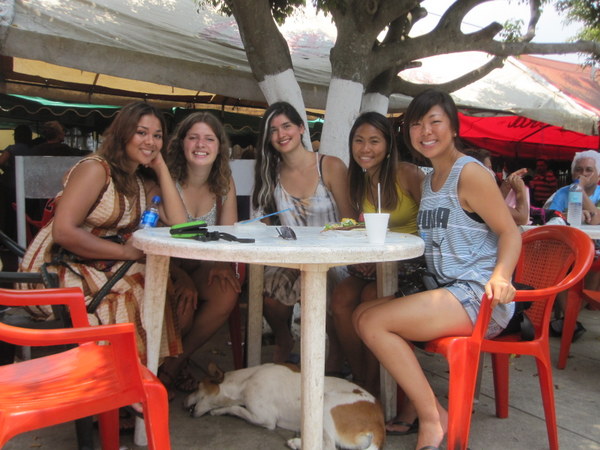 There were probably 40 vendors selling food. 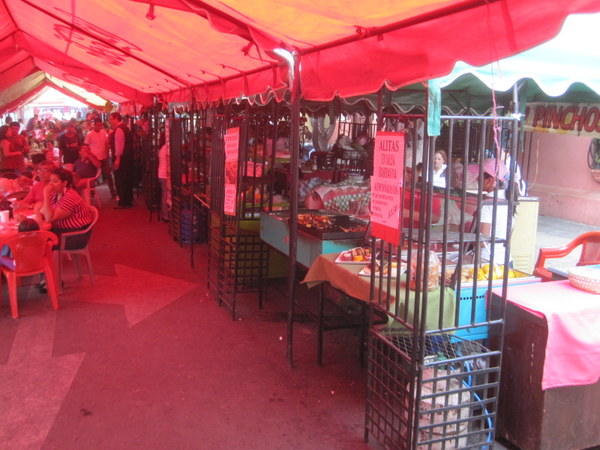 Here's one of the few non-meat food vendors. 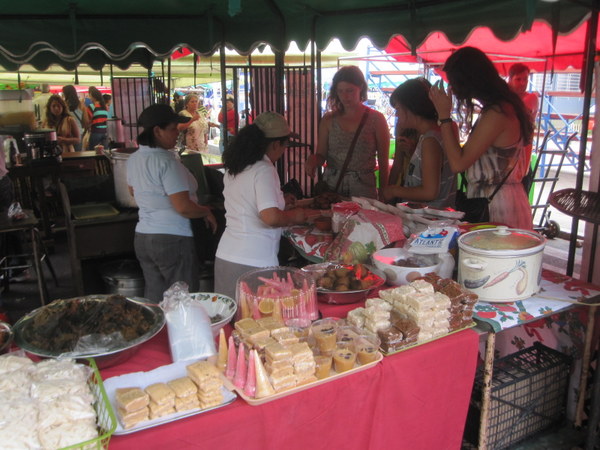 I went for the rabbit, which was pretty tasty (should have gone for the beef ribs though!):  And always remember, kids, enjoy a fatty. 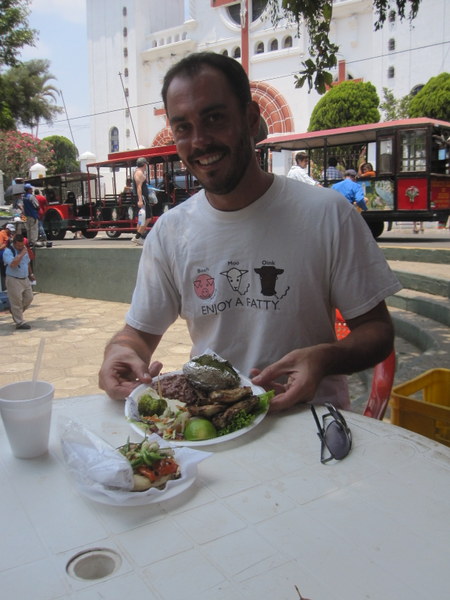 What does almost every town/city in Latin America have in common - ding ding ding - a church in the central plaza! 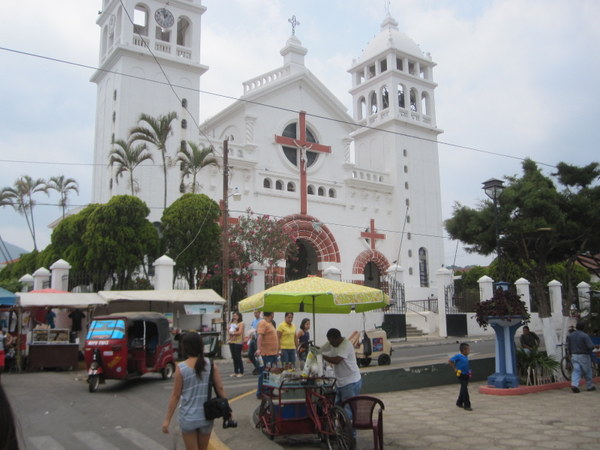 This cathedral is famous because it contains a black Christ statue (with a little white Christ standing below it): 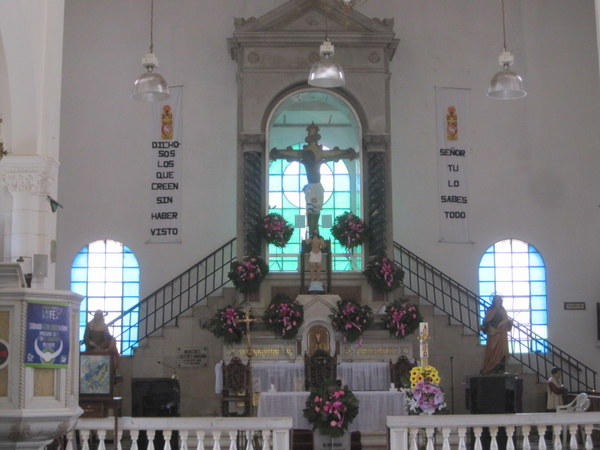 We spent the rest of the afternoon kicking it around the central plaza & ended the day at an Italian restaurant where 2 buskers (an Argentine & a French fellow) sang & played guitar.  If you are unfamiliar with the word "busker" as I was recently, busking is the practice of performing in public places, for gratuities.

The following day we decided to check out the local waterfalls, about a 25 minute walk out of town.  I'll tell you what, I feel like I have some good karma or something in my life because for the next 1 1/2 hours, I had to swim in a waterfall with 5 girls (In Mexico, they would say "no mames"): 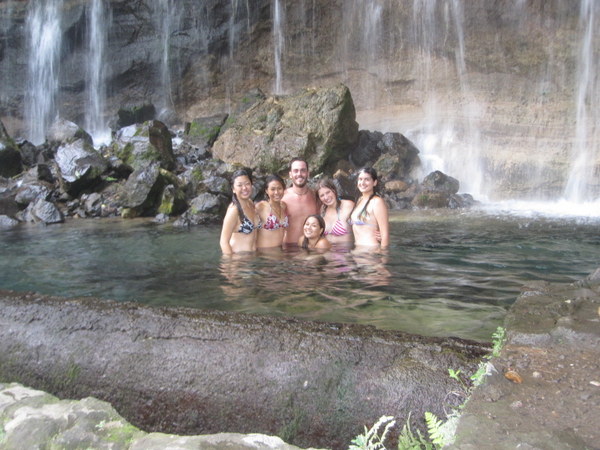 "Surfer's Shakes" below was a very popular smoothie stand for the many tourists. 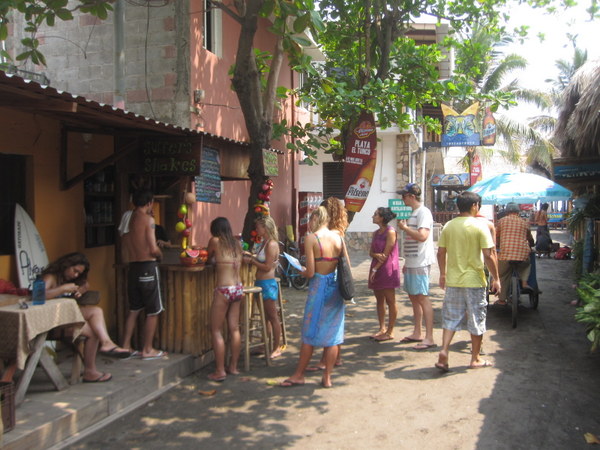 We stayed at the Tunco Lodge, which I'm happy to say also had 2 hammocks by the pool. 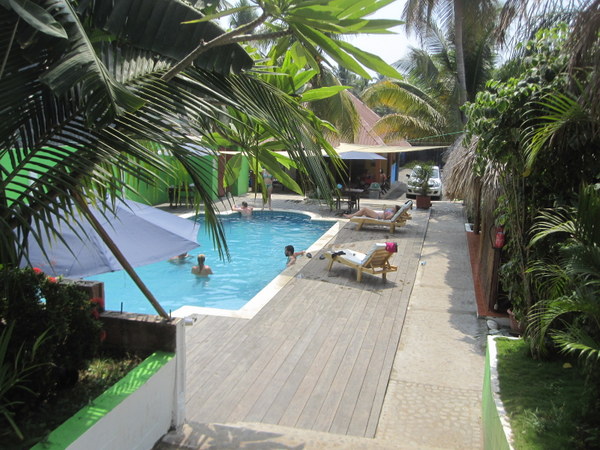 One other added bonus about being in El Tunco, I got to catchup with 2 friends I originally met in Mayto, Mexico and whom I have now crossed paths with in 3 different countries.

Paul & Nick who drove down from Bozeman, MT on motorcycles (Paul, as promised, you guys made the blog).  I met them in the first month of my trip when I was living in Mayto, Mexico.  They had just randomly rode onto the beach, with no plans of coming to Mayto, and I met them at a beach bonfire their 1st night.  They were also driving the Pan-American driveway so we stayed in touch.  We met up again in Xela, Guatemala, and now have the final hoorah in El Tunco. 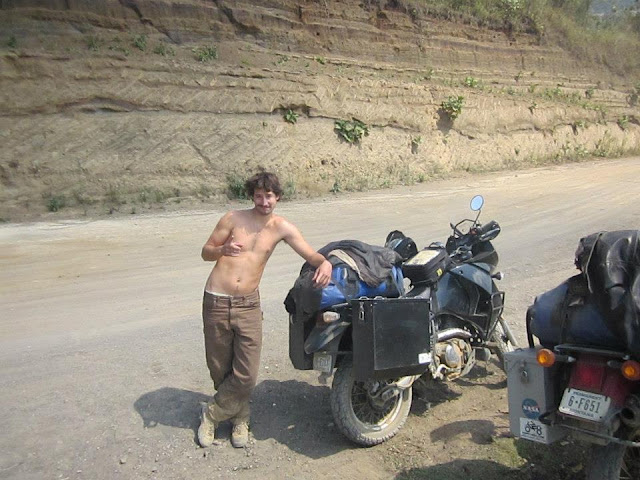 Paul is also a fan of books, as portrayed in this photo: 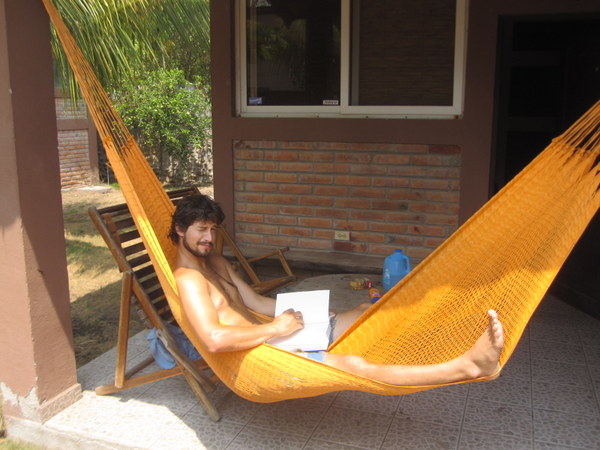 And Nick getting beat at ping-pong: 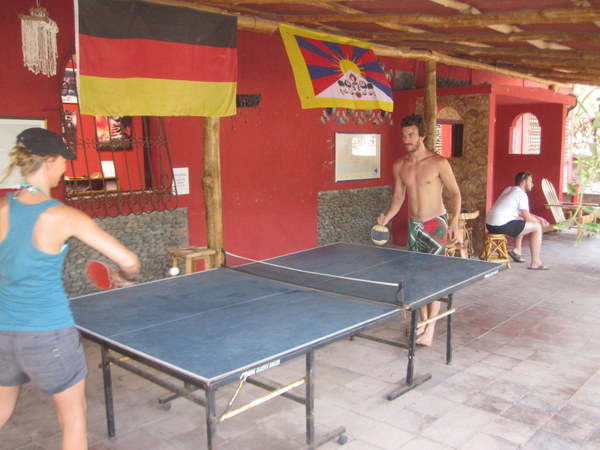 The only picture I could find of Nick with his bike: 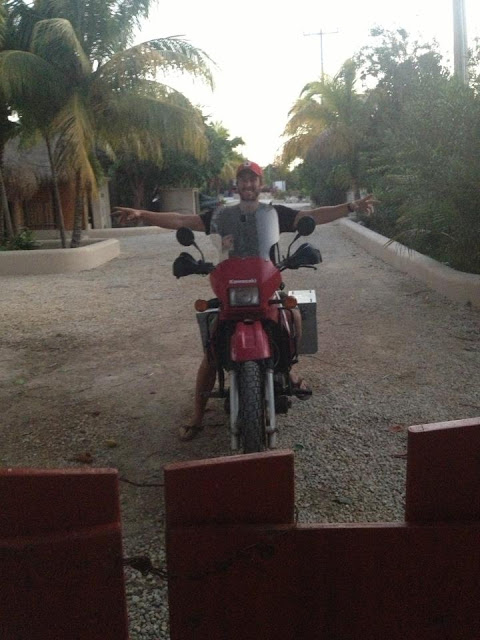 In El Tunco, I spent a lot of time doing very little, but decided the last night to check out the local circus.  Yes, somehow this really small beach town has a circus tent and a circus they put on every night for $1/person.  I am still laughing about this, because it ended up being more of a low budget talent show with the show ending when the power went off.  Ladies & gentleman, the greatest show on earth! 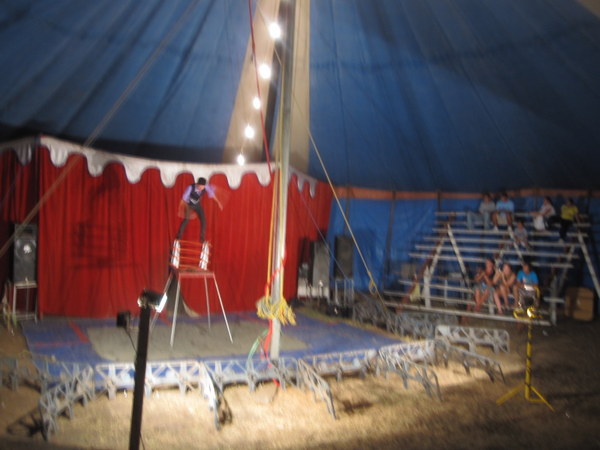 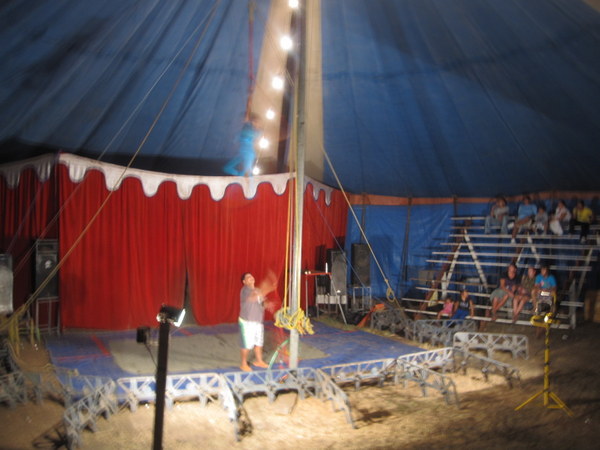 I had to try some of the circus food - strips of mango with chili sauce: 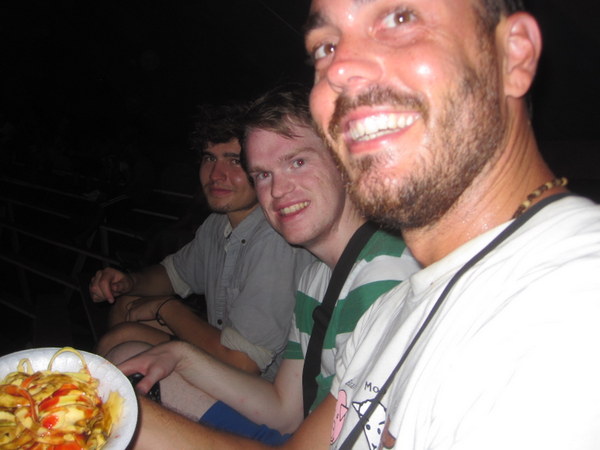 After 4 days in El Tunco, we made a last minute decision to spend 1 night the capital, San Salvador.  Here's a big, important, white building: 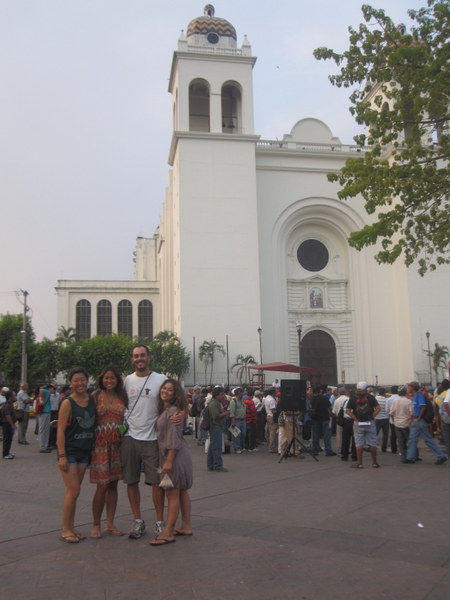 Here's one of the nice plazas: 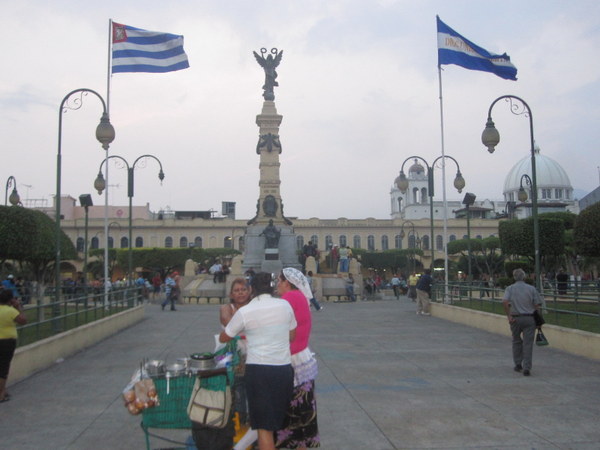 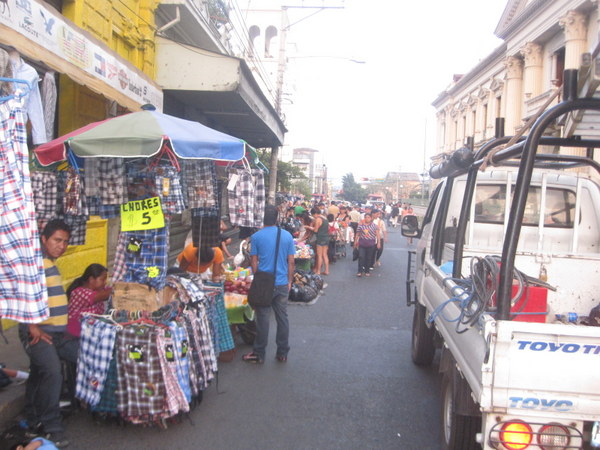 As I was walking along the market, an El Salvadoran guy driving by slowed up his car to ask me (In English) what the word "heavy" means.  Taken aback by such a random question (and in English), it took me a second to respond.  I gave him the most basic answer of having lots of weight, and hope the word "heavy" has been properly added to his English vocabulary.

I wish I wouldn't have taken a picture of one of El Salvador's most famous foods - the pupusa - because it is what I ate most of.  A pupusa is a thick tortilla traditionally stuffed with beans, cheese & chicharron (not the same as the fried pig rinds you see in other countries, this chicharron is cooked porked meat ground up into a paste.

Here's some other street food we came across (the round thing with the tomato slice in the middle is basically a pupusa, though they are not normally served with toppings.  Instead, they give you a side of curtido, which is fermented cabbage slaw, & some watery tomato sauce: 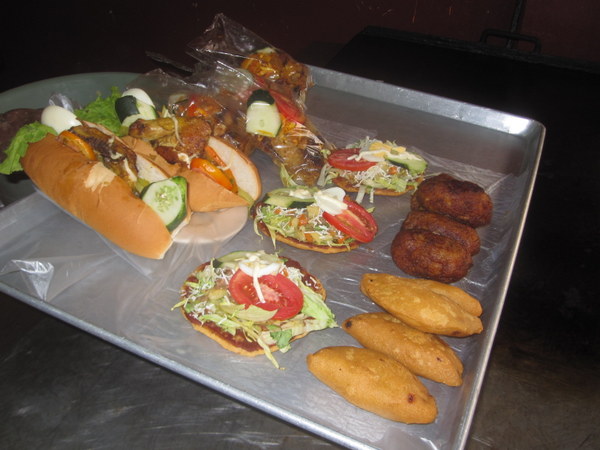 Our group shrank by two once we left San Salvador because Erika & Olivia were heading even farther south to Managua, Nicaragua.  So the remaining 4 of us headed to Lago Coatepeque.

Lago Coatepeque is a beautiful crater lake that you can swim in.  The downside is that almost the entire perimeter of the lake are private estates that put walls up, blocking your view of the lake.  I did snap some shots from our hostel: 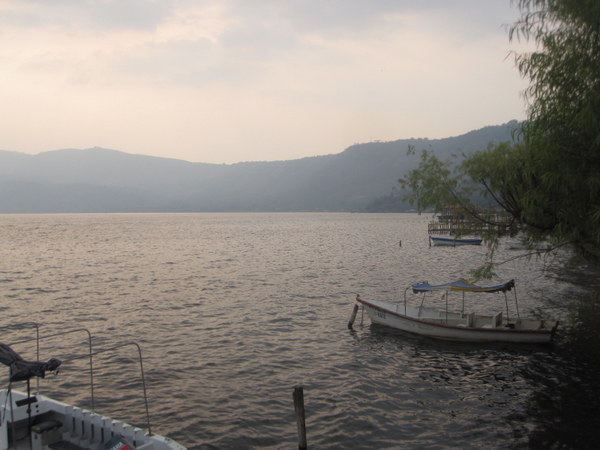 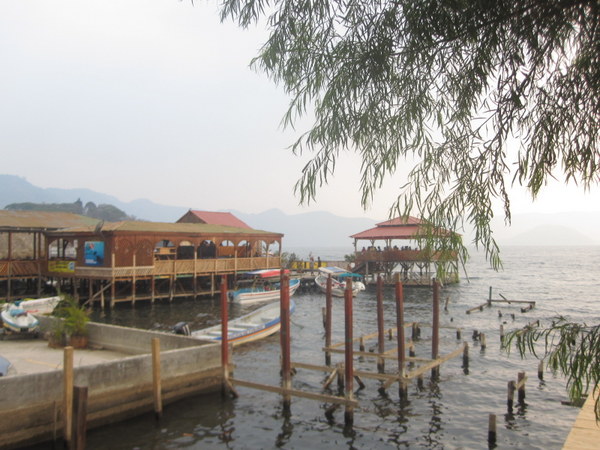 All in all this is a pretty sleepy town during the week.  Most of these small towns are dead during the week until the locals come from big cities, like San Salvador, on the weekends.  It poured the one night we were here, just after I got back from stuffing myself on a fat, fresh fish.

The finale of the trip was hiking the tallest volcano in El Salvador, Volcan Santa Ana (aka Llamatepec), at 2,381 meters.  It was only about 1 1/2 drive west of the lake. 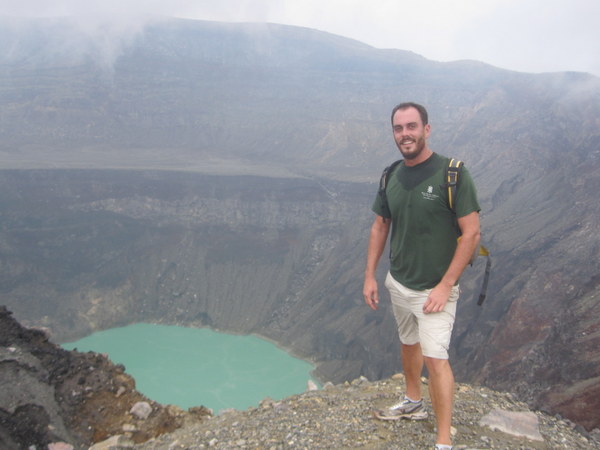 Though I did not feel unsafe anywhere in this park, it is required to have 2 armed policeman accompany your group when you are hiking.  Here's one of them heading up the back: 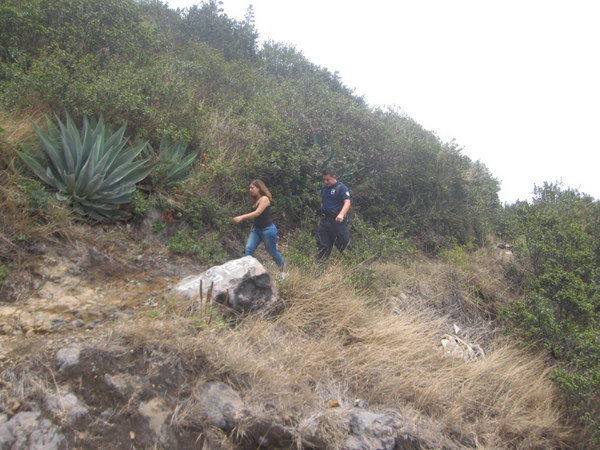 A truly beautiful hike, starting in the forest, passing through high grass, then up in a dessert like climate at the top: 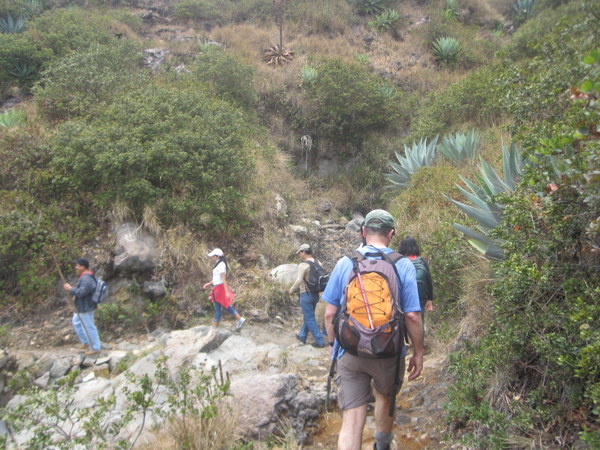 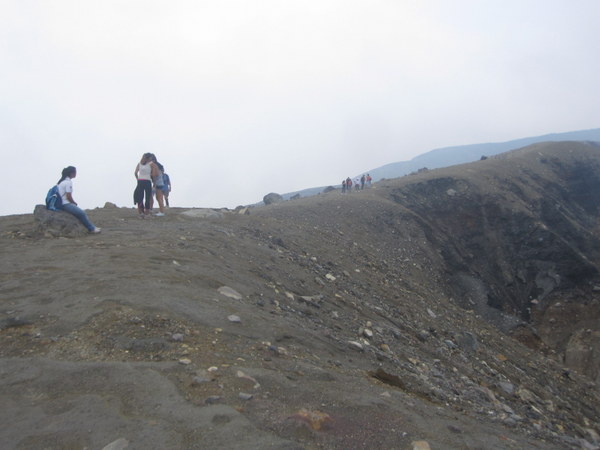 The Cerro Verde national park where Santa Ana is located contains another hikeable volcano - Izalco (known as "the lighthouse of the Pacific" due to its continuous eruptions, which almost entirely stopped in 1966).  Below is the view we had that day - it is the mountain on the right, mostly covered by a cloud. 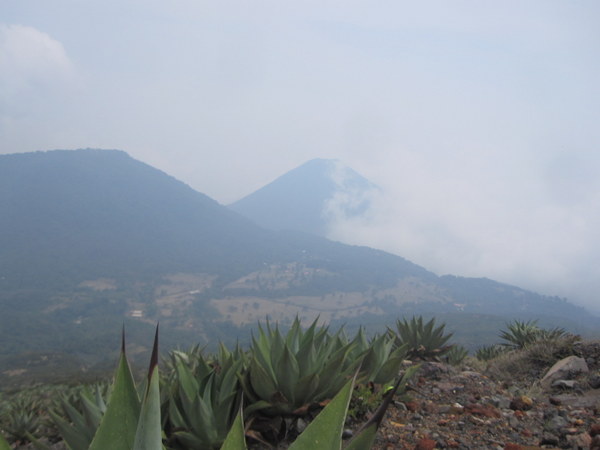 That's all I have to say for El Salvador.  I am back in Guatemala and will be flying out next Tuesday, 5/7/13, for a total of 6 weeks in The States for 2 weddings.  I will fly into Boston, head to Midland, MI, then finish in Napa, CA.  My Toyota will be parked here in Xela, Guatemala while I am gone.  This Thursday I have to do a border run, driving to the Mexican border to renew the permit on my truck, another 90 days, so that it will be valid by the time I get back.